Wenger happy with team’s away victory against Man City

The Gunnees gaffer Arsenr praises the discipline of his side after they beat Premier League champions Manchester City 2-0 at the Etihad stadium on Sunday.

The Frenchman was impressed by the manner in which his side silenced their critics with an yesterday’s away victory at Manchester City in the Premier League.

As, much had been made of Arsenal’s inability to beat the big clubs in the top flight in recent years, but goals from Santi Cazorla and Olivier Giroud consigned City to a first defeat in 15 games. 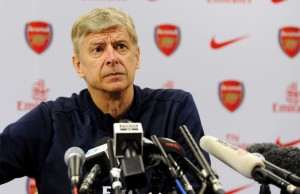 “We played high in their half and were deep in our half and it worked. I felt that we were well-disciplined, well-organised, had a good solidarity and overall we kept a good control of the game. We could even have done better many times on counter attacks.” said Wenger.

Wenger said that his side had that consistent discipline for 90 minutes which is needed in big games. He added that they looked in control away from home and now finally got a big win in a big game away from home.

The Arsenal gaffer also praised Per Mertesacker and Laurent Koscielny after they ensured Sergio Aguero was unable to make an impact in his first start for six weeks.