Arsenal manager Arsene Wenger felt his side delivered a “serious performance” after the FA Cup holders secured their place in the fourth round with a 2-0 win at the  over last season’s beaten finalists Hull.

There were the expected sweeping changes for both teams, with England forward Theo Walcott making his first Arsenal start in a year since a serious knee injury, while Hull switched no fewer than 10 players from their Premier League win over Everton on New Year’s Day.

The Gunners made the most of their positive opening. Costa Rica forward Joel Campbell had seen an early one-on-one opportunity saved, but Per Mertesacker headed the home side into the lead from a corner on 20 minutes. 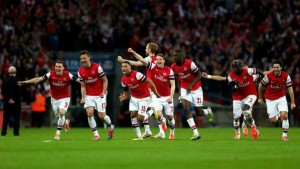 Any hopes of a comeback by Hull, who had raced into a 2-0 advantage at Wembley last May before losing in extra-time, were ended when Alexis Sanchez capped another man-of-the-match display with a fine curling effort on 82 minutes.

“We had a serious performance and we were in control,” said Wenger after his side beat Southampton 2-0  on last night.

“He is lively and always dangerous” said Wenger of the £32 million summer signing from Barcelona.