The Gunners gaffer believes the weekend’s series of FA Cup shocks represent a “warning” for his Arsenal side.

The Wenger’s men avoided joining several other Premier League clubs in making a surprise fourth-round exit with a 3-2 win away to second-tier Brighton and Hove Albion on Sunday which now booked their place in the last 16. 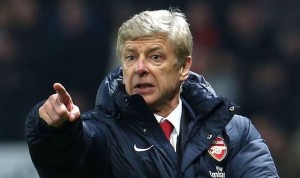 The German star Mesut Ozil,  Theo Walcott and the brilliant Tomas Rosicky all scored for Arsenal, ensuring strikes from Brighton’s Chris O’Grady and Sam Baldock to make it 2-1 and then 3-2 respectively did little more than cause a few extra nerves for the visitors.

The Gunners are now one of just a handful of elite Premier League teams in Monday’s fifth-round draw, after Chelsea amazingly lost 4-2 to third-tier Bradford City and Manchester City were eliminated following a 2-0 defeat by Brighton’s divisional rivals Middlesbrough.

“I think the results were a bit of sub-conscious warning for us,” said Wenger after a tense finish to Sunday’s Cup tie on the south coast.

“It woke us up a bit. I thought the results showed our game today would be different. But when you first see the results you have to check them twice and then you think ‘oh’.” he added.

The Frenchman said that his side is focusing on the next round. They have good experience from last season to know that every round is difficult. The most difficult games weren’t the expected ones. He added that they will fight and want to retain our Cup.