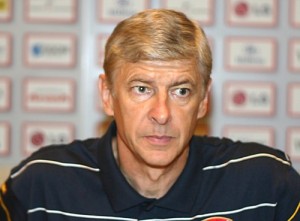 Arsenal manager Arsene Wenger has praised his side’s spirit after defeating Bolton Wanderers in the Carling Cup 2-1 at the Emirates and insists that winning the game without going into extra time was vital for the side.

Arsenal face Chelsea at the weekend and although Wenger once again stuck to his younger side – including some experience – he felt their legs had begun to tired with twenty minutes to go. Extra time would have been a heavy burden on his selection and Wenger also claims that luck was in Arsenal’s favour on Tuesday night.

“The first half I believe we had the chances, but in the second half we were caught straight away in losing the ball in our own half, they scored and from then on we were tested as the more experienced players took charge of the game, like Park, Arshavin and Benayoun. They made the difference.”

Arshavin, who has been under criticism recently put in one of his more memorable displays scoring one and playing an assist in the other and Wenger – talking to the clubs official website – was quick to point out how good a game the Russian had had.

“Andrey is a player who takes a bit of a gamble on nearly every ball he plays, sometimes he loses balls he shouldn’t lose, but when you look at the end of the game he has always had a big impact. Tonight he scored and made an assist. He had a good performance tonight.”

The wins sees Arsenal through to the quarter finals of the Carling Cup for their eighth successive year but all focus will now go to the Premier League where the North London club will face Chelsea.