According to the reports, West Ham United have joined Arsenal in the chase of Bafetimbi Gomis after he revealed his frustration at a lack of game time at Swansea City.

Gomis admitted that he was promised more playing time upon signing for the club in the summer, but is now looking for an exit.

“When Bony was here, it was also planned that I should play a certain number of games…that wasn’t the case.” said Gomis.“I have to think about what has happened. I don’t think promises were kept. I don’t know what will happen.” he added. 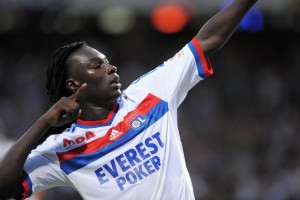 Now West Ham boss Sam Allardyce is keen to add the services of the striker to his side while Gary Monk is trying to convince him to stay, especially after the departure of star man Wilfried Bony. Arsenal have been linked a with a move for the striker in the past.

On other hand, Monk is looking to keep Gomis at the Liberty Stadium and with Bony joining Manchester City, another departure could cause some problems for Swansea’S attacking options, particularly with only a few days until the transfer window closes.

West Ham have been enjoying a very good Premier League campaign so far, sitting in seventh place, and they are well on their way to keeping up to pace with Manchester United in fourth.