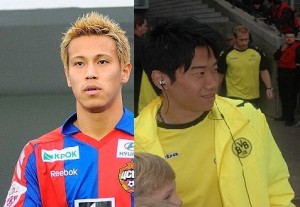 Both Keisuke Honda and Shinji Kagawa have been linked with a move to Arsenal in the past and there is no questioning of their ability but which of the two would Arsenal prefer to have on their books?

Although Honda is perhaps the elder of the two and possibly more experienced, his main position is as an attacking midfielder, with Kagawa more adept at the “second striker” role we hear so much about these days. Honda certainly knows how to find the net as well as Kagawa but it’s his movement off the ball that has caught the attentions of so many European giants.

There are players who can pass the ball exquisitley only for them to stand still thereafter, perhaps the ball played is enough however those who can pass well and then move instantly with an almost natural flair is quite something and not seen very often. Whilst the likes of Arsene Wenger and Sir Alex Ferguson practically try to breed this type of player it is not always easy. Honda certainly falls into that category, he can pass, move off the ball, and most importantly perhaps, he can score goals.

Kagawa is three years younger that his international team mate, he has that winning experienced he gained with his current club Borussia Dortmund and although he may not have featured as much as he would have liked, that experienced of being part of a winning team is there, something that Arsenal are currently lacking in a very big way. There will be those that suggest the Premier League is harder to win, perhaps so, but try telling that to the likes of Dortmund, Wolfsburg and Stuttgart, sides that recently won the Bundesliga title. It could be said that Bayern Munich would normally win two out three titles in three seasons with one team happening to pick up more points than they do every now and then.

Both players would not be cheap. Honda currently plays in Russia for CSKA Moscow, a league that are no longer short of a few quid and there have been reports that he could fetch around £25m. Kagawa on the other hand plays for the current Bundesliga Champions and they know that at just 22 years of age, they have someone special. For some reason though if you are not Bayern Munich you can usually pick up good quality players in Germany for relatively little money. Mertesacker is a prime example of this, especially when one reads about the prices Bolton Wanderers are looking for when it comes to Gary Cahill.

Both have their positives and negatives but if Arsene Wenger could purchase either of the two which would you prefer?