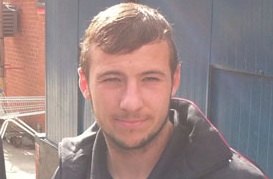 After months of speculation and interest, Adam Le Fondre has finally got his move up the Football League.

The 24 year-old signed for Championship side Reading after they agreed a fee with Rotherham United for the striker’s services – believed to be in the region of £350,000.

The Royals were a number of clubs that had shown a real interest in the striker but it’s the Berkshire side that have won the race ahead of the likes of Coventry City, Sheffield Wednesday and also West Ham United.

If you’re wondering why Le Fondre is in such demand, then a quick glance at his goalscoring record gives a justified reason.

Since coming through the ranks at his hometown club Stockport County, the lad from Offerton has scored 110 goals in 256 games in League Two, a record that has got better with each club he has played for.

He left County to join Rochdale on a permanent deal in 2007 following a successful loan spell at Spotland, and went on to net 38 league goals in 98 matches.

This form alerted Rotherham, and in his two full seasons at the Don Valley stadium, Le Fondre scored a stunning 50 goals and had already bagged four goals in just five matches this campaign for the Millers.

So his eye for goal is clear for all to see. However, the big question now is whether or not Le Fondre can make the step-up and acquire a similar goalscoring ratio in the second tier of English football.

While he has a knack for being in the right place at the right time, there are question marks in regards to what else Le Fondre brings to a team.

When considering the man he is replacing at the Madjeski, Le Fondre’s work-rate needs to step up a level to fill the void of the hugely-influential Shane Long, who has made a step-up of his own to the Premier League with West Brom.

Long was the best striker in the Championship last season, not just because of his 24 goals but also because of the continuous pressure that he would put on opposition defences, never giving them a moment’s rest.

Thankfully, the man that has moulded Long into the player he is today over the past few seasons is still at the helm for Reading, and can have a similar impact with Le Fondre.

Brian McDermott is an excellent man-manager that can get the best out of players, and he knows that he will have enough raw talent in Le Fondre to work with and make him a Championship striker.

McDermott will also know that he has the creativity in his squad to craft the chances for Le Fondre to finish in the likes of Jimmy Kebe and Jobi McAnuff.

Time will need to be given to Le Fondre as the step-up will not happen overnight, but the Royals may have purchased a rough diamond that can help fire the goals lost in Long to maintain another promotion push.

So what do you think? Will Le Fondre make the step-up from League Two to the Championship? Or should Reading have spent their money elsewhere to replace Shane Long? Leave a comment and let us know your views.