The Gunners failed with an initial offer £15m last summer for the midfielder after Sporting slapped a £30m price tag on his head.

The Portuguese club are ready to reopen talks with Arsenal willing to pay £20m and his agent Jorge Mendes is trying to broker a deal.

“My dream is to play in England. I know some clubs are interested but my agent Jorge is looking after it and I am relaxed.” said Carvalho.

He said right now his mission is to work in Sporting and they will be in charge of any transfer and my future. As, already the talks between the two clubs broke down in the autumn after Carvalho was valued at £30m by his Portuguese team.

But with Arsene Wenger taking Arsenal through to the Champions League knockout stages, where they face Monaco, the importance of solving their well-documented defensive problems have increased. Carvalho, is one of the very few top international-class players who will probably be available in January. 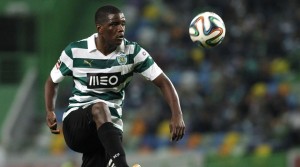 Arsenal have been playing Mathieu Flamini in front of the back four with Jack Wilshere and Mikel Arteta out injured. Carvalho can also play at centre back.

The youngster played in two of Portugal’s three games at the World Cup and was also linked with Manchester United, although they have since signed Daley Blind.