Wojciech Szczesny claims that his side can now win ‘ugly’

Arsenal manager, Arsene Wenger has urged his side to remain consistent after the Gunners moved into fifth spot.

Goalkeeper Wojciech Szczesny claims Arsenal have what it takes to win “ugly” and fight their way back up into the top four of the Premier League.

The Gunners produced a battling rearguard display in the 2-1 victory at West Ham on Sunday which moved them level with Southampton, their next opponents on New Year’s Day at St Mary’s Stadium.

Despite all of their perceived defensive shortcomings, it was a fifth win from the last six matches in all competitions for Arsene Wenger’s side, who have lost only once since the end of November. 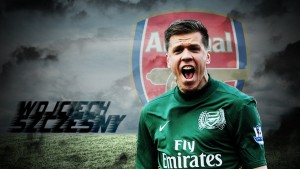 The Poland goalkeeper believes the Arsenal’s defence, which was bolstered by the return of Laurent Koscielny to resume his partnership with Per Mertersacker deserves full credit. He believes France international Koscielny is as good as you are going to get in England.

“We had to dig very deep against by far the strongest West Ham side I have ever played against. It was quite ugly at the end, but we got through”said Szczesny.

Arsenal are now only three points behind third-placed Manchester United.Though, Szczesny said his side focus must be first on delivering another quality performance on New Year’s Day.