Arsenal goalkeeper Wojciech Szczesny is facing the prospect of a significant club fine after being accused of smoking in the showers following the 2-0 defeat against Southampton on New Year’s Day.

As, Arsenal gaffer Arsene Wenger has previously criticised Jack Wilshere following photographs of him smoking while out socialising and is believed to be deeply disappointed with Szczesny.

While, Arsenal denied claims on Monday from former midfielder John Jensen that Szczesny had been fined and would not play again this season following an unspecified disciplinary offence.

However, they did not then subsequently refute the specific accusation that Szczesny had been caught lightning up a cigarette in the showers at St Mary’s. 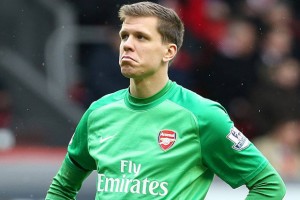 But the gunners maintain that Szczesny has not yet been fined but disciplinary action would now appear to be a formality, with the club expected to impose a £20,000 sanction. The situation also places serious question-marks over his place in the Arsenal team that will face Stoke City on Sunday.

Szczesny had already been dropped for the FA Cup tie against Hull City on Sunday. Although, it was always planned for David Ospina to play in the competition, his Premier League place was surely already under threat due to his poor form.