Wojciech Szczesny could be sold by Arsenal unless his attitude improves

The Gunners goalkeeper, Szczesny will not be dropped against Stoke City on Sunday as a consequence of smoking after the 2-0 defeat against Southampton but is still playing for his longer-term future at Arsenal.

Gaffer Arsene Wenger was furious with Szczesny for lighting up a cigarette in the showers at St Mary’s but, beyond a likely £20,000 fine, the incident will not impact on his team selection for Sunday.

Szczesny’s place was in some doubt anyway following his errors in the Southampton defeat and the availability now of both David Ospina and Emiliano Martinez. 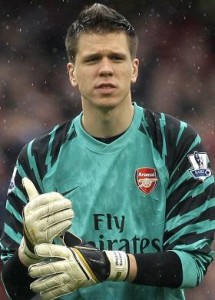 Although there have been other mistakes this season, as Szczesny was sent off against Galatasaray in the Champions League. However, Wenger has been satisfied with most of his performances, particularly in last month’s 2-1 win against West Ham United.

The Frenchmanhas always shown considerable faith in Szczesny since he arrived as a 16-year-old, first by promoting him when he could have signed Hugo Lloris in 2012 and then again last summer when he recruited Ospina as his understudy.

Butthere are frustration, that Szczesny who is now 24 years-old has not fully realised his potential despite all the first-team experience that he has had at a relatively young age.