Women throwing the punches in 2012 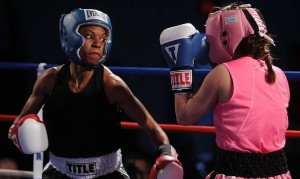 For the first time in Olympic history, women will take to the boxing ring at the 2012 Olympics as part of the official programme. The sport was actually included in the 1904 Olympics as a display event, held in St Louis, United States but this was its only inclusion and it was subsequently banned in most countries, including Britain following the games. Boxing was the last all male summer sport in the Olympics and having missed out on being included in Beijing, 2008 the International Olympic Committee (IOC) approved Women’s boxing for the Olympic Programme in 2009.

The women’s discipline will feature 3 weight classes; Fly Weight (48-51kg), Light Weight (57-60kg) and Middle Weight (69-75kg). In order to accommodate this, the men’s competition is being reduced from 11 to 10 divisions. One boxer per country can qualify for each category in the event. The women’s qualification will be dealt with by the 2012 World Championships in Chongqing, China in May next year. The top eight boxers from different countries in each of the three weights earn Olympic places, although this may be adapted in order to fit a quota of participants from each continent.

The move has sparked criticism spanning from the introduction of women’s boxing to general opposition to boxing being included as a sport and claims that it glamorises violence. The controversy has been further heightened with officials at Amateur International Boxing Association (AIBA) reportedly proposing that women should wear skirts to distinguish them from men. The proposal has been met with huge criticism and the debate will be resolved in January when officials meet and discuss dress codes.

Ireland’s Katie Taylor was very vocal in her opposition of the proposal. Three times World Champion Taylor was also pivotal in the inclusion of women bouts in the Olympics, boosting the campaign and contributing to the success. The event has increased in popularity over recent years since its reintroduction as a recognised sport although it still lags behind its male counterparts. However, its rise to Olympic event will surely give the further recognition it has been working towards.

Already this year, there have been a string of successes for Women’s British boxing. Last month Nicola Adams won gold in the Flyweight at the European Championships in Rotterdam. The competition was hugely successful for the British hopefuls with 3 of Adam’s English team mates also picking up medals in their respective categories; as well as silver for Lynsey Holdaway of Wales. Ireland’s Taylor also picked up gold in the lightweight class.

British females hoping to make the cut on boxing’s Olympic debut include Savannah Marshall and Natasha Jonas, who has strengthened her case after scooping a bronze medal in Holland last month. Both women will be competing for the three places up for grabs against a host of other hopefuls.

Meanwhile, in the men’s boxing Andrew Selby has booked his spot at London 2012 after beating British counterpart Khalid Yafai in ‘a box off’ to qualify. Selby won a silver medal at the World Championships in Azerbaijan last month but his team mate Yafai also made it to the quarter-finals. This result meant both men had achieved qualification for a place in London with only one spot available, prompting GB Boxing to a decider consisting of a three fight bout. Selby will form part of the 10 man squad that will hope to build on the 49 medals that have been won by Britain previously.