We’ve yet to see a shock at the City West Hotel in Dublin, but we could well see some classic matches as the seeded players come up against each other.

First up is Adrian Lewis v Kevin Painter, which has all the makings of a classic to kick off proceedings, and with a bit of history between these two dating back to 2012.

Don’t forget you can watch all the action from City West, country restrictions permitting with Bet365 and their live stream service. Simply click the image below, select ‘live streaming’ at the top of the Bet365 website to select your match! 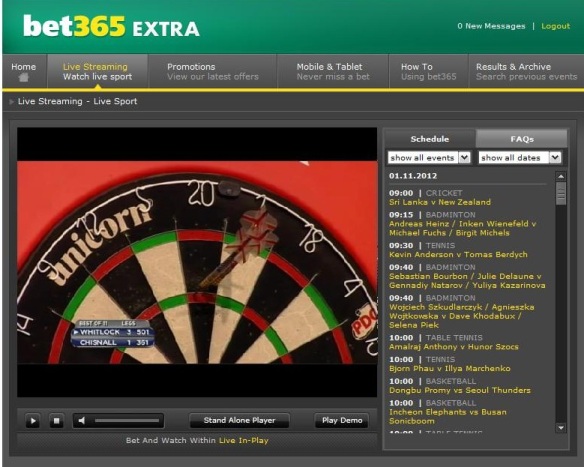 Click this image to be transported to the Bet365 live streaming service!

‘Jackpot’ as Adrian Lewis is known came through a tough opening match against Daryl Gurney, eventually winning 3-1 but suriving three match darts against the Northern Irishman.

Kevin Painter had a relatively easier passage through, beating ‘The Hammer’ Andy Hamilton 3-1 in another nervy affair. This one should be just the tonic to kick things off in Dublin.

Phil Taylor overcame a potentially sticky first round tie, beating the ‘Bronze Adonis’ Steve Beaton 2-0, and the Stoke legend will be hoping to put in an improved performance tonight.

The Power certainly has everything to lose however, coming up against 9/1 underdog Andrew Gilding, however the 16 times World Champion has everything in his locker to make it through to round three.

James Wade will also be looking to bounce back to form with victory tonight, however ‘The Machine’ faces a difficult opponent in Robert Thornton, who overcame Justin Pipe 2-0 on Monday.

Wade looked impressive in his 2-0 victory over Andy ‘The Pieman’ Smith but at 8/15 in the betting to overcome Thornton looks a tad short.

Gary Anderson averaged almost 100 with defeat of local favourite Brendan Doolan in the opening round on Monday, and looks like he means business this year.

Taylor still looks the man to beat in Dublin, going for his 12th Grand Prix but with the doubles to start there’s definite scope for an upset or two.

Make sure you tune in!